For many Simi Valley natives, the Ronald Reagan Presidential Library is considered one of the city’s most prized attractions. With it’s gorgeous hillside views and endearing Reagan legacy, the library documents and remembers the life and Presidency of a charismatic leader and his adoring wife. Pivotal moments such as the fall of the Berlin Wall, the installment of the Reagan Recovery, and the nomination of Sandra Day O’Connor (the first female Supreme Court Justice) are only some of former President Reagan’s achievements highlighted by the library. However, while many do come to the Reagan Library to be inspired by and remember the accomplishments of a much beloved President, the library also features outstanding exhibits from all over the world.

Currently, the library is featuring exhibits on both the RMS Titanic (Titanic at the Reagan Library) and former Secretary of State, Madeline Albright’s famous pin collections (Read My Pins: The Madeline Albright Collection). And what’s interesting about both is how different the two exhibits are each other. One sheds new life and light on the stories behind doomed White Star Line with surviving artifacts, and the other, puts an interesting spin on subtle self-expression in high-stakes politics. 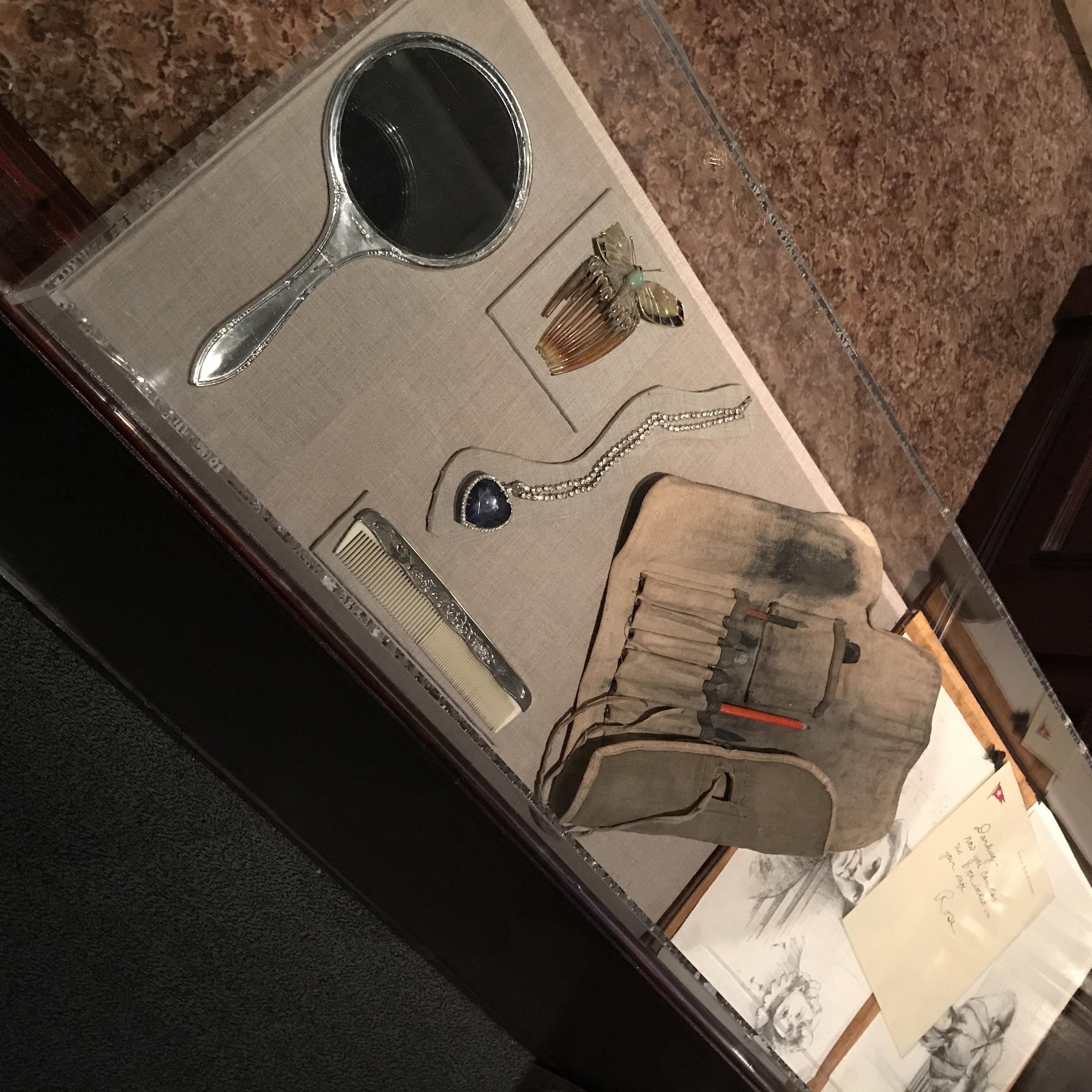 The Titanic exhibit spans across two, large spaces in the Reagan Library but boy, is it something to see! Anyone who is obsessed with James Cameron’s 1997 film or simply fascinated by the history surrounding the once-luxurious “Ship of Dreams” will enjoy this wonderful exhibit. It features numerous items: original deck chairs and authentic RMS Titanic admission tickets, to original life jackets and pocket watches owned by some of the wealthiest men in Europe at that time. In visiting the exhibit, I came across a beautiful red coat that looked scarily similar to one I had just purchased, which in all truth is probably why it caught my eye. However, I noticed that on the side of it, a long patch of fabric was missing. Little did I know there would be a cute little story behind it. 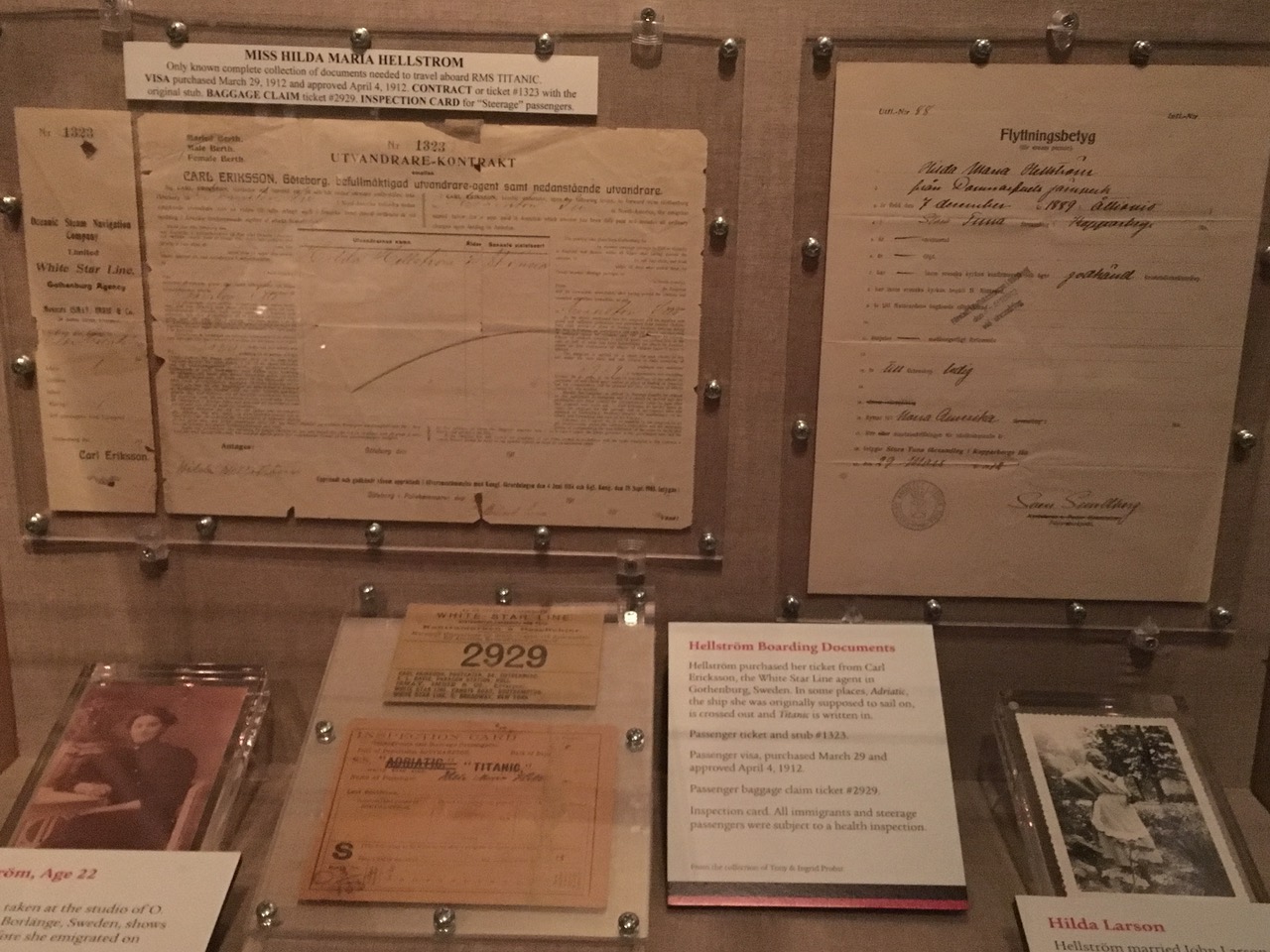 The coat belonged to a woman by the name of Marion Wright Woolcott. Marion was a second class passenger from South Hampton, England making her way to America to marry her fiancé, Arthur. On the day of the sink, Marion managed to find a place on lifeboat nine. On the day of her wedding, she wore the red wool coat that she had narrowly managed to survive in. And when her sons were sent overseas to the military, the pieces of fabric that were missing from the coat were taken to make Bible covers for her three sons. How special (and lucky) is that?

The Madeline Albright exhibit was equally as impressive. Although I was quite familiar with former Secretary Albright, I do admit that even with a Political Science background, I had never heard of any politician using pins as a means of symbolizing political stances. The collection features over 200 pins which were used as bold statement pieces capable of applying (ever so subtly) political pressures and promoting hardline American positions on international or domestic issues throughout the former Secretary’s time in office.

One of my favorite pieces was Former Secretary Albright’s pin collection was her bejeweled American flag pin that she wore to North Korea. In no other place was a visible, sworn allegiance to government more crucial, as any absence of their “badges of adoration” on visible clothing was thought to be politically deviant and grounds for brutal punishments. However, in the exhibit’s photo of Kim Jong-Il and former Secretary Albright, nothing is more prevalent than that of her flag pin signifying our nation’s fervent belief in democratic values; an ever so quiet but strategic display of opposition against oppressive governing.

Now, the Titanic exhibit will be open to public until January 7, 2018 but if you’re looking for something special to do this weekend, the Madeline Albright exhibit would be a great thing to see and ends this Sunday, June 25, 2017. So grab the family, get in the car and go to Ronald Reagan Library! There’s something there for everyone in the family, and places to eat. Plus, their air conditioning system is just an added bonus in this summer heat!